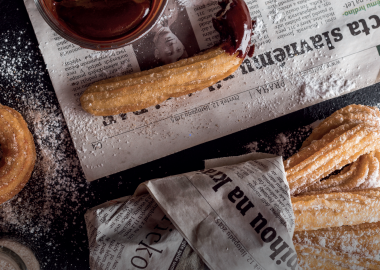 OTHER:
1lt of vegetable oil for frying

Piping bag with a star nozzle

CHURROS
Put the diced butter into a pan, add 200ml of cold milk and a pinch of sea salt. Put the pan on the stove and bring to the boil. Sieve the flour and baking powder together in a bowl. As soon as the milk boils, take it off the heat and quickly stir in the sifted flour and baking powder. Beat the mix with a wooden spoon until smooth and it comes away from the sides of the pan. Tip the mixture into a bowl and cool for a couple of minutes. Then gradually add the beaten eggs one at a time, beating well until the mixture is a smooth, glossy batter that drops slowly from the spoon. Cover the bowl with a clean tea towel and rest the batter for 30 minutes.

GUITTARD CHOCOLATE SAUCE
Chop the dark chocolate and put into a bowl. Put cream into a small pan, add the cinnamon stick, chilli, butter and vanilla seeds in cream, and bring to a simmer. Remove from heat and sieve then pour over the chopped chocolate stir until smooth.

CINNAMON CHILLI SUGAR
Combine the ingredients for the cinnamon sugar.
Set up a deep-fat fryer or fill a large pan one third full with oil. Heat to 180C. Fit a large piping bag with a star-shaped nozzle and fill with batter. Once the oil is at temperature you can start to cook the churros. Pipe 2 or 3 finger-length strips of batter directly into the pan cutting off each strip with a pair of scissors. Don’t try to cook too many at once or the oil will start to cool down. Cook the churros for about 45 seconds to one minute on each side until golden and crisp. Remove them from the pan with a slotted spoon, drain on kitchen paper and sprinkle liberally with the cinnamon sugar. Serve with the chocolate sauce drizzled or as a dip.