When the chocolate begins to get warm, it will soften and then it will melt and become liquid. The softening point of chocolate is about 85F and the melting point is about 93F

Like many substances, the natural vegetable fat in cocoa beans – cocoa butter – will crystallize to form as solid as it drops below its freezing point – about room temperature. The invisible molecules of natural cocoa butter fat in the chocolate are arranged in a geometric pattern causing the chocolate to be a solid. When the pattern is properly formed while making the chocolate, then the chocolate will be shiny, smooth and you can hear it snap when it breaks. Learn more on how to temper chocolate.

Chocolate may be frozen but it must first be protected by wrapping with plastic wrap or waxed paper because when the chocolate comes out of the freezer the package will get moisture on it like any frozen food, and it will be wet which can make the chocolate sticky and not shiny.

A fluid requires a certain force exerted against it before it will begin to flow and it requires a certain force to sustain movement, once begun. The greater the force, the greater the viscosity. When a liquid is thick like honey it is called viscous or it is said to have a high viscosity. By comparison, pancake syrup would be considered a lower viscosity than honey. When working with chocolate, different viscosities are used and required for different in applications. 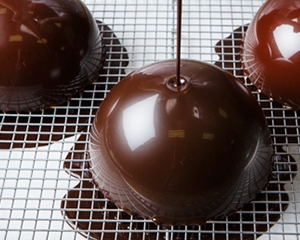