"Our culinary style at Rose Street and Patisserie 46 could be described as rustic and elegant.  We combine the charm of the rural roots and the sophistication of modern pastry. We've used Guittard since we opened in 2009 and throughout that time, the product quality has remained consistent. I'm proud to support a company whose foundation represents quality and evolution."

Patisserie 46 chef and owner John Kraus began his career in London, UK at the Dorchester Hotel. There, while working with the boulangers, he began to observe the intricacies of crafting pastry. Kraus then contributed to the opening of the Michelin-starred restaurant, Fleur de Sel. Returning to the U.S., Kraus worked at the five-star, five-diamond Wild Boar in Nashville, TN. He also worked as Executive Pastry Chef at Nashville’s exclusive Magnolia Restaurant, and was known for his innovative delights as pastry chef at NoMI restaurant in the Park Hyatt Hotel Chicago. In 1999,

Chef Kraus was invited to join The French Pastry School in Chicago, where he worked and taught for a decade until he moved to Minneapolis to open his own bakery, Patisserie 46, which opened its doors in 2010. In 2016 he opened his second bakery, Rose Street Patisserie, that same year he was inducted to the Relais Dessert as the first American born member. 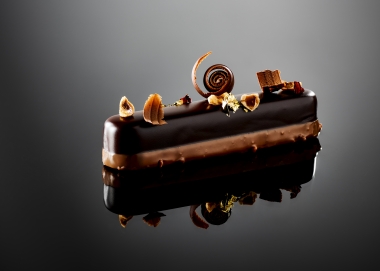 For The Chocolate Sable Breton

Cut the butter into dry ingredients in a robot coupe.  Add egg and rhum until dough forms.  Chill and roll to 2mm.  Cut to desired shape and bake at 360°F for ten minutes.

Combine Puree, Raspberries and trimoline and warm to 40°C.  Add Pectin and sugar mixture.  Return to a boil and cook for 2 minutes.  Cast onto flexipan mat and cut to desired shape.

Whip the heavy cream to soft peaks and reserve.  Combine egg yolks, milk, heavy cream and sugar and cook as for anglaise to 82°C.

Cool to 38° and fold in whipped cream.  Cast into finger mold and cover with insert  Breton, ganache, royaltine crunch and raspberry coulis.  Freeze

Bloom Gelatin in water and reserve.  Combine Remaining ingredients and bring to a boil.  Add gelatin to mixture and emulsify.  Reserve until use.  Use at 35°C.

Recommended for this recipe