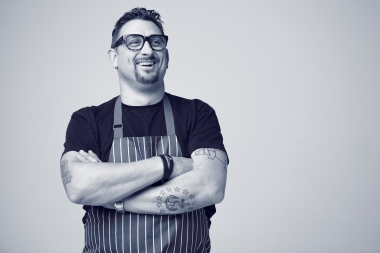 "I like to make delicious food that people want to eat; the quality and consistency of Guittard's products are unbeatable--for sweet and savory application, alike."

A graduate of the culinary program at Johnson & Wales University, Cosentino cooked at some of the country’s most beloved restaurants, including Red Sage in Washington, D.C. and Rubicon, Chez Panisse, Belon, and Redwood Park in the Bay Area, before opening Incanto, his first executive chef position. At Incanto, Cosentino drew critical acclaim for his innovative Italian and whole animal cooking. During Incanto’s twelve-year tenure, Cosentino mastered the art of hand-craftedcured meats and helped raise awareness about utilizing the entire animal, including its offal.

In 2014, Cosentino opened Cockscomb, showcasing a range of sustainable meat cuts and dishes inspired by the city’s rich culinary and artistic history. His cooking at Cockscomb earned a glowing 3-star review from San Francisco Chronicle’s restaurant critic Michael Bauer, who noted of the restaurant: "There’s nothing else like it, and Cosentino has a consistent, unwavering vision."

Author of the 2012 cookbook Beginnings: My Way to Start a Meal, Cosentino’s long-awaited Offal Good: Cooking from the Heart with Guts, was released in fall 2017, celebrating whole-animal cooking. He also collaborated with Marvel and wrote Wolverine: In The Flesh. Cosentino won season four of BRAVO's "Top Chef Masters,” earning over $140,000 for The Michael J. Fox Foundation, and he is amember of Chefs Cycle, a 300-mile annual bicycle ride that raises funds and awareness in support of No Kid Hungry. He lives in San Francisco with his wife Tatiana, and son Easton.

note: if you add coffee liquor up gelatin by one sheet

Put Chocolate into a bowl and set aside with a Strainer.
Combine Milk, Cream and half the sugar (coffee liqueur if using) together in a pot and heat up. Do not Boil.
Combine yolks and the remainder sugar in a mixing bowl.
Temper the Yolk mixture with a little bit of the Milk mixture then put yolk mixture into the pot and cook, stirring often until the mixture is nappe. Thick enough to coat the back of a spoon.
Strain that mixture over the chocolate. Let it sit while you bloom the gelatin.
Once the gelatin is bloomed add to the chocolate mixture and stir to combine. If doing a larger batch, it is best to use a stick blender to make sure everything is incorporated.
Cover Cremeux with plastic wrap directly onto the surface and sit over ice bath. Once chilled put in refrigerator to store.

Brown Butter until Nutty on the Stove. Let it sit, do not chill because you want it still slightly warm when added to other stuff.
Mix eggs, whites and sugar together in a bowl until smooth with a spatula. Add Flour and mix until smooth.
Add Crème fraiche and vanilla extract until smooth.
Add Brown butter until smooth.
Stir in any Mix ins that you choose.
Put desired shape onto Silpat lined sheet tray.
Bake for 8 -10 minutes. Turn half way to brown evenly. Use an offset to remove once setup.
Store in airtight container.