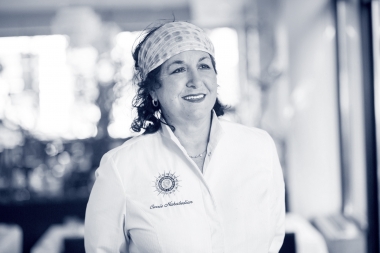 "There is a personal feeling about Guittard...it is not mass produced and you can feel the love and focus every time the bag is opened."

A native of Chicago's northern suburbs, Chef Carrie Nahabedian​ began her career as a teenager, working in the kitchens​ ​of the Ritz​ ​Carlton.​ Her celebrated path has ​taken​ ​her from ​Le​ ​Perroquet,​ ​Jovan​ ​and​ ​Le​ ​Francais​ ​to​ ​LaTour​ ​at​ ​the​ ​Park Hyatt​, and​ ultimately, a hard earned title as Executive​ ​Chef​, ​Four​ ​Seasons​ ​Hotels​ ​in​ ​Chicago,​ ​Santa Barbara​ ​and​ ​Los​ ​Angeles.

With her invaluable education in hospitality, Chef Carrie and her restaurateur cousin, Michael Nahabedian, opened NAHA ​In November​ ​of​ ​2000. Her ​Mediterranean-inspired​ ​American​ ​cuisine earned a ​Michelin​ ​Star for seven consecutive years, a James Beard Award for ​“Best​ ​Chef,​ ​Great​ ​Lakes”, and​ ​four​ ​stars by Phil Vettel—​the highest​ ​rating​ ​given by​ ​the​ legendary ​Chicago​ ​Tribune critic.

In April​ of ​2013,​ Carrie and Michael opened Brindille—French for “twig”—offering refined Parisian, a celebration of their love of French culinary traditions, techniques and flavors. Hailed​ ​as​ the ​“​Best​ ​Restaurant​ ​to Open​ ​in​ ​2013”​ ​by​ ​the​ ​Chicago​ ​Tribune, Brindille was later awarded the James​ ​Beard​ ​Foundation​ Award​ ​for “Outstanding Restaurant Design, 2015” for the work of Tom Nahabedian and Bureau of Architecture and Design.

On September 22, 200​9, Chicago Mayor Richard M. Daley named it “Carrie Nahabedian Day”, coinciding with her induction into the Chicago Chefs Hall of Fame, and in 2016, Chef Carrie Nahabedian was awarded the Jean Banchet Lifetime Achievement Award. On March 31, 2018, NAHA closed after eighteen years, just as Brindille celebrated it's fifth anniversary on Clark Street. With the closing of her beloved NAHA comes the announcement of a new restaurant, further securing Chef Carrie Nahabedian's place as not only a pioneer of the past, but an active participant in the future of hospitality.

For The Chocolate Sucree

For The Ganache Custard

For The Port Syrup

Port syrup is rich dense and fruity syrup made from sugar, water and Port wine.

For The Chocolate Sucree

Cream Butter, Sugar, Egg, Vanilla and Salt together in a mixing bowl on low speed with a dough hook until just combined.  Sift the Flour with the Cocoa Powder and add to the dough and mix just until smooth.  Chill. Roll out dough using a rolling pin and place into desired molds. Bake at 375 degrees “blind” until almost cooked through.  Set aside.

For The Ganache Custard

Place milk and cream in a saucepan and bring to a boil.  Pour cream mixture over the chocolate and stir gently.  Temper Chocolate into the eggs.  Pour chocolate mixture into the baked shells and bake at 350 degrees until barely set, approx. 8-10 minutes.

For The Port Syrup

Reduce 1 cup of Port Wine, 1 cup of Sugar and a splash of water in a saucepan over medium high heat with a split Vanilla Bean until the syrup is rich and coats the back of a spoon.  Let cool.  Cut fresh figs in half and toss with a little of the Port Syrup.

Spoon over the tart and serve immediately!